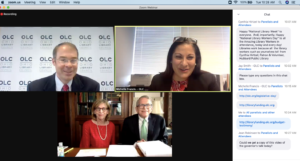 The Ohio Library Council’s annual Legislative Day at the Statehouse is typically a busy, one-day event when library directors, trustees, and supporters visit with lawmakers in Columbus. This year, it is a full week, and those visits are happening virtually.

“As we have traveled around the state, we’re just amazed by all of the different things libraries do today, particularly during the pandemic,” DeWine said.

From serving as internet hot spots to helping people find jobs, and signing up Ohioans for vaccine appointments, DeWine said that libraries had been put to the test this year, and that he appreciates everything they have been doing. 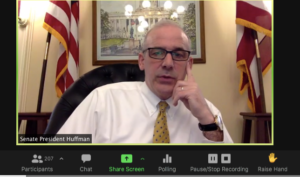 “Libraries will continue to play a significant role in connecting people,” DeWine said. “We are going to invest some very serious money this year in trying to wire the state, but we’re still going to have people who don’t have a computer. A lot of times we think this is just a rural problem, and it is a rural problem, but there are some urban areas that do not have broadband. You all continue to be great partners. We’re going to do everything we can do to improve the situation.”

“All of the libraries have been so good about helping kids sign up and telling them about the Imagination Library,” said Mrs. DeWine. “What we’re really trying to do is create lifetime learners and lifetime readers and we know that’s what you all want to do. We’re just excited about this program and thank you for all of the help you have given us.” 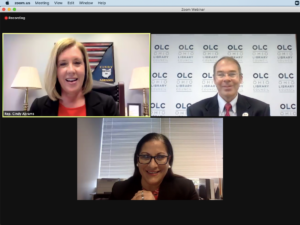 Library staff and supporters will hear from state senators and representatives throughout the week during online sessions hosted by the Ohio Library Council. Ohio’s public libraries top issue, library funding in the biennial state budget, will be discussed, along with a host of innovative programs and services offered to Ohio’s 8.4 million cardholders.

“Throughout this past year, our libraries have had to find new ways to continue doing what they do best, and that is serving their communities.” said Michelle Francis, Executive Director of the Ohio Library Council. “We know that Ohioans are increasingly turning to their public libraries for essential services. Keeping up with that growing demand for services is only possible with adequate funding.”

The state’s Public Library Fund (PLF) provides funding to Ohio’s 251 public library systems. Libraries across Ohio are asking lawmakers to make public libraries a priority in the Fiscal Year (FY) 2022-2023 budget and maintain the PLF at the current (FY21) rate of 1.7% of the General Revenue Fund.

If you missed the live presentations during Ohio Library Week, recordings are available below. 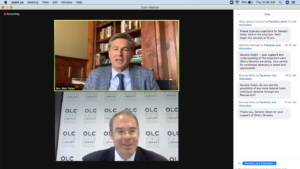 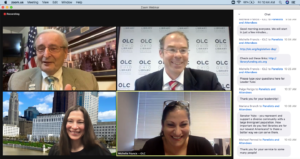